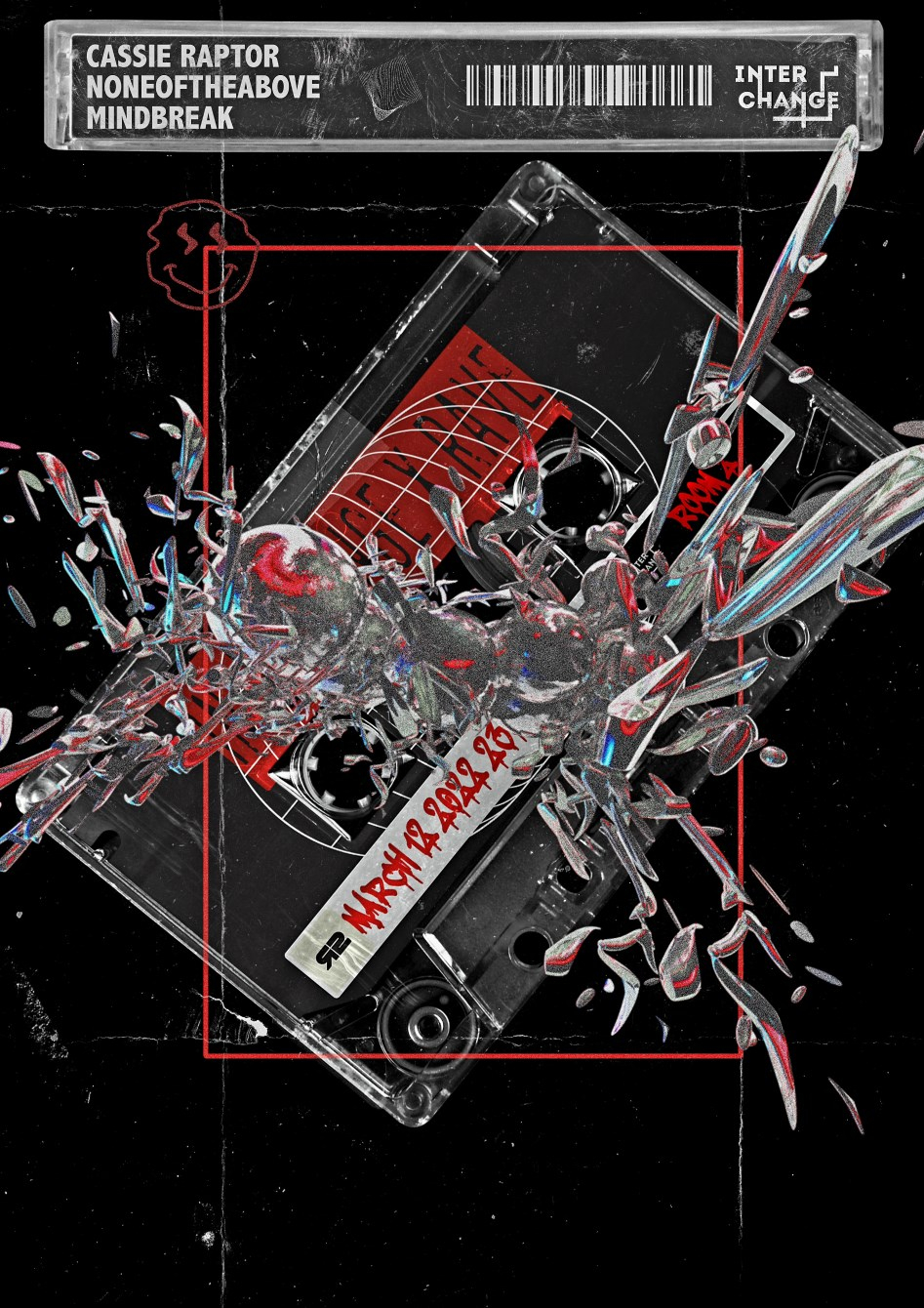 After the SOLD OUT first edition of InterChange X Rave to kick off are first event of 2022 we will bring you 2 Huge Glasgow debuts from the Rave scene !!! ⚠️CASSIE RAPTOR⚠️ Cassie has been making a serious name for herself playing alongside some of the biggest acts and showing them how it’s done. Powerful kicks, organic textures, screaming voices – her sets release a cathartic energy, a visceral and determined sound that escapes the evidence. An ecstatic chase between distressing and luminous atmospheres where broken rhythms, elements of industrial noise and acid converge in a liberating clubbing experience. You can check out her most recent set here live from Boiler Room https://youtu.be/L-NUQTeiPxM 😈NONEOFTHEABOVE😈 Up until meeting and forming Noneoftheabove in Rotterdam in 2015, with the direct purpose of their first mutual show, Nigel Wildeboer and Yoeri van Eijk had been playing and producing techno independently since their mid-teens. Sparking together creatively as well as getting to know each other was equal parts of creating the trademark sound that now is Noneoftheabove. “Straight forward techno”, is how they describe the sound themselves, better even is to throw in hardcore, industrial, acid, and one of their main sources of inspiration: schranz. Coined in Germany in the first half of the 90s, describing a merciless type of techno. Literally mix these ingredients together and you get what Noneoftheabove represents. The pair sees electronic music as a tool for breaking limits, always aspiring to create new innovative ways not just in the studio but also as DJs. Valuing the difficult art of actually getting people to dance, they come as an experienced b2b-team, handling festival- and club venues globally with a precise manner, preferring to fill their sets with the same kind of raw energy as their own productions. Instead of working together from scratch in the studio, the boys produce their own material separately, then meeting, trying and testing, finally yielding and restructuring the tracks into what becomes Noneoftheabove. You can check out their most recent set here live from Verknipt https://soundcloud.com/verknipt-events/noneoftheabove-verknipt-festival-2021 👺MINDBREAK👺 Finishing off this line up its our trusty resident Mindbreak, who is sure to perfectly balance out this line up after opening the first edition I’m sure you know what to expect 😈 https://youtu.be/k6LE40Wu_gw As we enter Room 2 in true RAVING !!! Style, Expect 90s old skool rave Hard Techno Industrial Gabber Hardcore and much more !!!! Tickets start at £7.50 On Resident Advisor