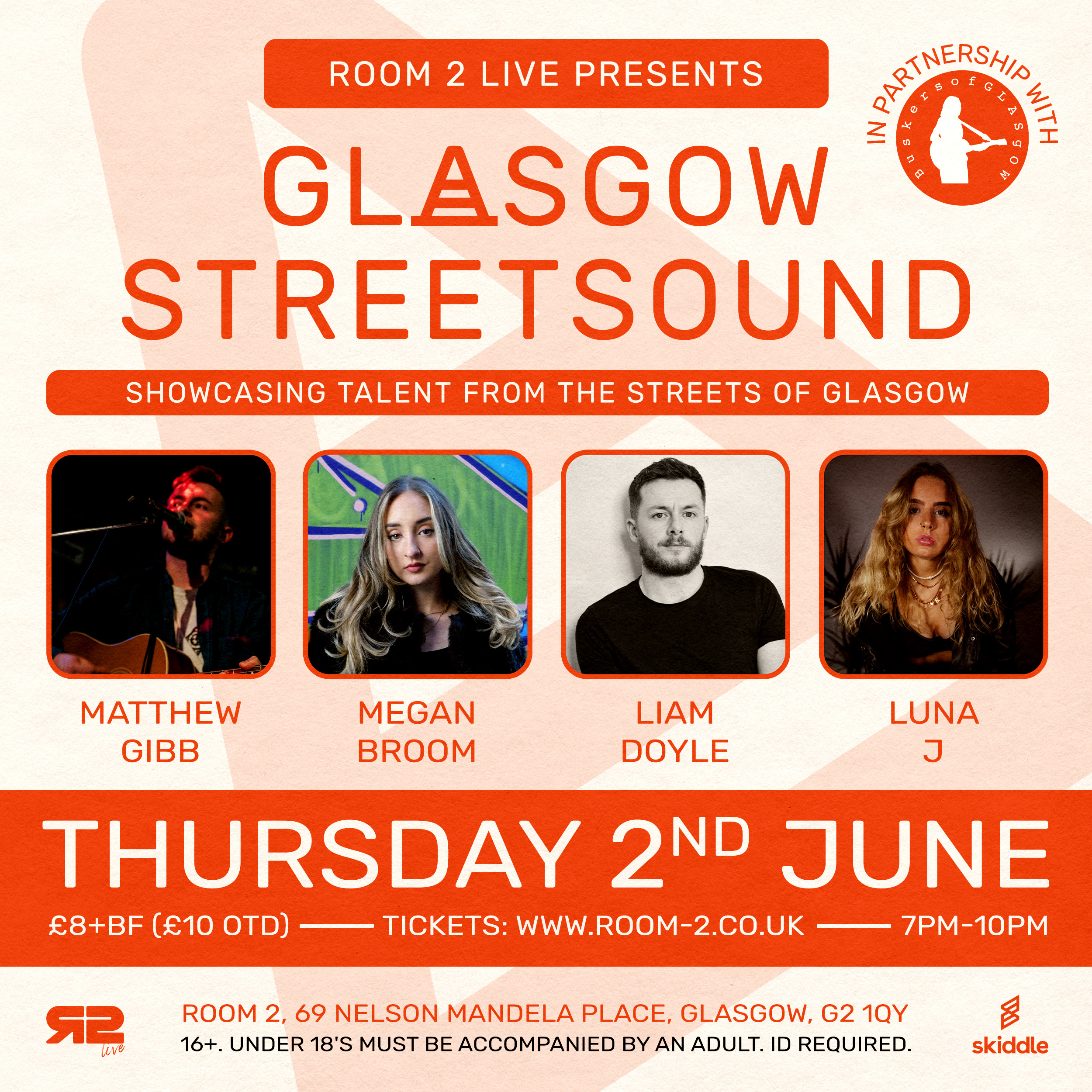 Glasgow Streetsound in partnership with Buskers of Glasgow is a showcase at Room 2 Live, aimed at giving recognition to Glasgow’s talented street performers and giving them the opportunity to play in a city centre venue with a world class sound system.
Join us for an evening of amazing live music from Matthew Gibb, Megan Broom, Liam Doyle and Luna J. Please select the ticket option for the act you are primarily buying your ticket to support. £8+BF in advance. £10 on the door. 16+. Under 18’s must be accompanied by an adult. ID required.
MATTHEW GIBB: “20 year-old Matthew Gibb has a voice beyond his years and is an adept guitarist. He’s a crowd pleasing entertainer who has proved popular with audiences wherever he’s played. Over the past six years he has busked and played in venues in the UK and Ireland. His experience includes winning the inaugural Jim Diamond Award for Best Young Scottish Musician. Played live on BBC Radio 1. Played at Stirling Castle’s Hogmanay 2017. Appeared on STV Glasgow’s Riverside Show. Finalist in the Young Scot Awards 2015. Airplay on BBC Radio and Canadian commercial radio.
MEGAN BROOM: “A 20 year-old musician based in Glasgow since a young age who has grown a passion for singing and delicate guitar playing. She first started out performing covers on the streets of Glasgow and Queens Park before playing more small gigs and entering the open mic scene; regularly making an appearance at Nice N Sleazys and co-hosting at Bloc+. Heavily influenced by folk, jazz and R&B; Megan often creates a rather mellow atmosphere with her melodious and soft performances.”
LIAM DOYLE: “A singer/songwriter from Glasgow’s Southside, known for his distinctive voice and emotive lyrics. Initially starting on YouTube and racking up thousands of subscribers, he transitioned to live shows. Over the years, he has supported a wide range of artists in the UK/Ireland, headlined King Tut’s Wah Wah Hut, recorded in Abbey Road Studios and his debut EP charted at number 12 on the iTunes Singer/Songwriter chart. Liam has busked on the streets of Glasgow, and beyond, since 2013 in order to fund recording and all the costs associated with being a musician. After a bit of a break from any kind of releasing pattern due to the pandemic, Liam has been working in the studio and has a new EP coming very soon!”
LUNA J: “A 20 year-old pop/hip hop artist with a slight punk twist. Her cheeky personality is taking Scotland by storm. With relatable lyrics and catchy hooks that pull you in with a feeling of familiarity, these are songs that get in your head and don’t come out. LUNA J likes to take influences from artists such as Dominic Fike and Adele to make her lyrics up beat whilst still displaying emotion.”
Thank you for your support and see you there!
Buy Tickets