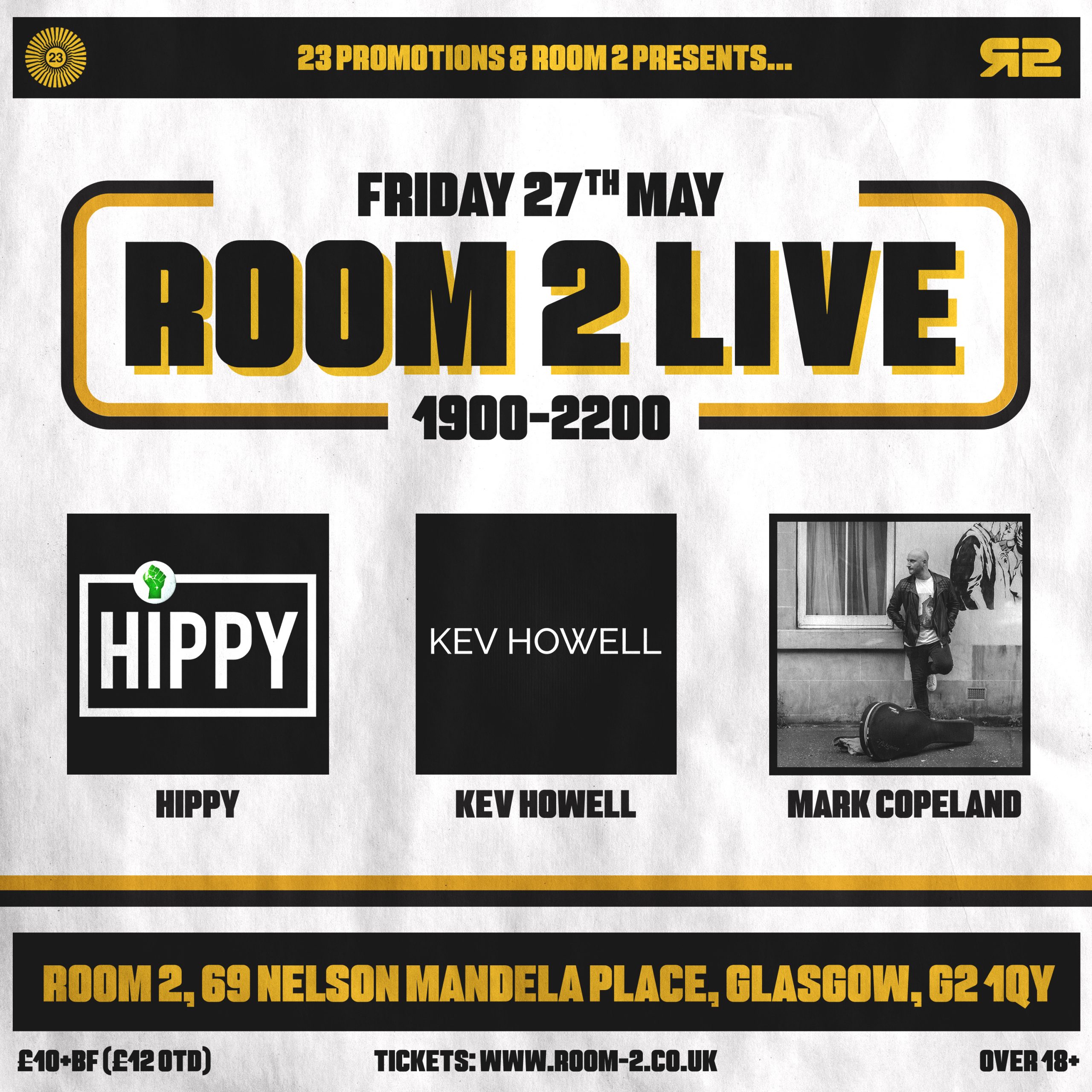 Join us for an evening of amazing live music from Hippy, Mark Copeland and Kev Howell. Please select the ticket option for the act you are primarily buying your ticket to support. £10+BF in advance. £12 on the door.

18+. Challenge 25 is in place. Valid forms of ID are UK driving licence or passport. Gig will be subject to Covid guidance/legislation at the time for a 400 capacity venue.

HIPPY: “Paul Hipson – singer/songwriter. Hugh Frizell – guitars. Formed in mid 2019 after Paul and Hugh met via a mutual acquaintance in Glasgow. By October 2019 their first single ‘Aries Girl’ was released followed up by subsequent singles ‘Feelgood’, ‘Junkyard Babies’ and ‘Volunteer’. The album Behind Every Song Is A Story was released to critical acclaim in October 2020. Hippy released their second album Falling In Love With Being Alive in August 2021. Which has received both local and national radio play so far. Hippy have also enjoyed a recent return to the live scene bringing their brand of acoustic rock to a wider audience and looking forward to their upcoming Room 2 gig very much.”

MARK COPELAND: “Glasgow based singer-songwriter Mark Copeland returned in 2020, recapturing his muse during lockdown. Echoing the emotional intensity of luminaries such as Mike Scott, with the melodic gift of King Creosote, Mark Copeland comes steeped in a rich tradition of writers that can count their home country, and its town and cities and the people within them, as a formative influence. He has played Glastonbury festival, shared a stage with Steve Cradock, Chris Helm and a whole host of musicians from across the city and beyond – and it’s this varied experience that has produced one of the most enigmatic performers working in Scotland today. After relocating to South London in the autumn of 2013, he landed prestigious slots at legendary venues The Bedford, The Troubadour and The Slaughtered Lamb, and now back home in his beloved Glasgow with a debut EP promised for 2021, this is an act not to be missed.”

KEV HOWELL: “Perfecting his own unique style, Kev Howell blends the brawny punch of rock with smokey poetry and 60’s psychedelia. The independent songwriter from Glasgow has been self-releasing music via his own label, November Records. Described as ‘Bewitching and Sublime’, Kev has featured on numerous blogs and stations including BBC Introducing and Amazing radio in the UK & US. During the global pandemic in 2020, amid lockdown, Kev began writing songs for the follow up to his debut album ‘ Haunting Ambition’. One of the first to be released was ‘Arrows’, a southern blues vibe with an almost anthemic chorus, the track was written about the times we are facing. The song was highlighted instantly as a favourite and attracted new fans from all over. Emerging With a new focus and band, the new lineup that consists of , Kev , Jonny and Martin played their first handful of gigs in front of packed audiences to coincide with latest single ‘ Longnor’. The band were so well received they decided to film and record an itimate live show at the end of 2021 for promo and future release.”

Please select the ticket option for the act you are primarily buying your ticket to support. 18+ gig. £10+BF. £12 on the door.

Thank you for your support and see you there!